A book commemorating the remarkable story of a musician and fiddle maker who lost his life in World War I has been presented to the English Folk Dance and Song Society to be placed in the Vaughan Williams Memorial Library.

A copy of Richard Spencer Howard: The man who made violins by Chris Sweeney was presented to Laura Smyth, the VWML Library and Archives Director, at a special presentation at Leeds Central Library in March. 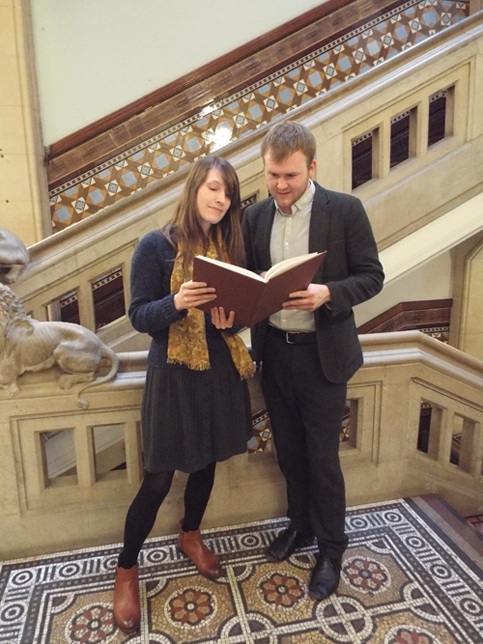 Laura and Sam with one of the four books produced about Richard S. Howard

The book records the life and work of Richard S. Howard, whose story has been immortalised in the recent music and storytelling project, Made in the Great War, by Chris’s son, Sam.

The idea for Made in the Great War emerged after Sam, who performs with the award-winning Bellowhead, bought a violin from a shop in Oxford that appeared to be new but the label inside gave the name and date Richard S. Howard, 1915, along with a sticker that read ‘Made during the Great War’.

Chris’s research discovered the violin had been made, but never finished, by a luthier and some-time music hall performer from Leeds called Richard Spencer Howard. He had signed up in 1916 aged 35 and, less than two years later, fought at the Battle of Messines in West Flanders, Belgium. His violin was left unfinished in his workshop.

The carved pieces of the fiddle were left languishing in a manila envelope until Oxford luthier Roger Claridge set about finishing the instrument more than 90 years later and Sam bought it.

He then applied for one of EFDSS’ Creative Artist Residencies to develop the touching story into the Made in the Great War show.

With further support from Arts Council England, the show developed into a national tour.

The book was handed over at a small ceremony at Leeds Central Library, attended by members of Richard’s family, many of whom were tracked down through Chris’ research and were delighted to learn the story of their ancestor.

“It was a beautiful and moving event. The extended family of Richard Spencer Howard and those with a connection to his music through the violins he made were able to meet, many for the first time, and share in celebrating his life.”

“It was a poignant reminder of all that was sacrificed during World War One, and is undoubtedly only one of many tragic stories.”

Only four copies of the book were produced – one each for Sam and Chris, one for Richard’s family and the final one for the VWML. The book has been catalogued here.