We’re thrilled to have recently received the conserved Lucy Broadwood broadsides - the first batch of material to have undergone conservation treatment as part of The Full English Project.

Lucy Broadwood (1858-1929) was a folk song collector in the late 19th and early 20th centuries, and one of the founders of the Folk Song Society in 1898. A passionate and prolific collector of songs she, over a period of nearly 30 years, played a prominent role in the Society as Honorary Secretary, Editor of the Folk Song Society Journal, and President from 1928 sadly only a year before her death.

As part of her folk song collections, the VWML holds a volume of broadsides collected by Lucy in the late 19th and early 20th century.  Broadsides were cheap ephemeral street literature which often contained songs and ballads. They were extremely popular during the 16th-19th centuries as a form of entertainment or a means to find out the news of the day. Designed to be sold on street corners for a penny or halfpenny they were printed on poor quality paper which is prone to decay. Unfortunately many have been lost to history.

We are fortunate that certain collectors did see the worth of recording these fleeting reflections of society (one of the earliest collection of broadsides was collected by Samuel Pepys) and many of the first folk song revivalists did collect broadsides – such as this wonderful ‘scrapbook’ of broadsides that Lucy Broadwood collated. 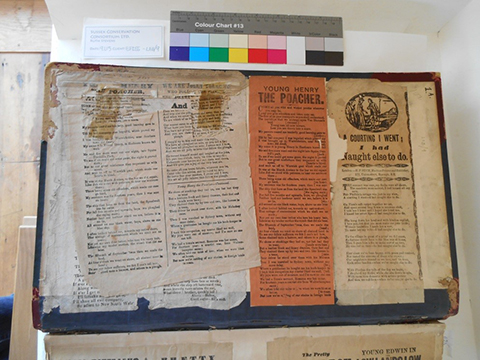 The broadsides are extremely susceptible to tears and disintegration. You can see here on the broadside on the right - ‘A courting I went’ - that the paper has become very brittle and fragmented and it has fallen away in parts. On the left hand side the ballad ‘Young Henry the Poacher’ has been stuck together by sellotape which is actually damaging the item. 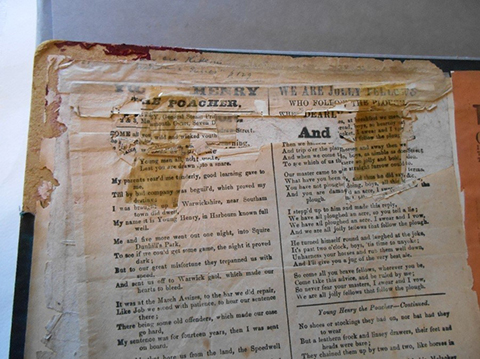 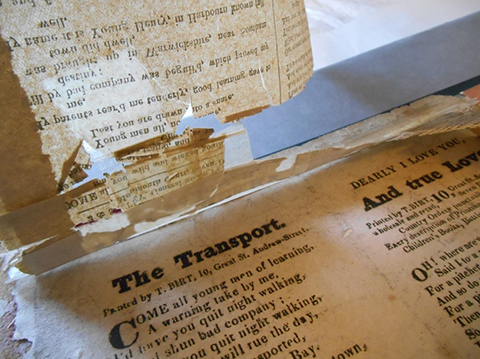 Details on some of the broadsides showing the damage that can be caused by adhesives.

We had the pleasure of contracting Sussex Conservation Consortium Ltd  to undertake the important conservation work which was required to ensure this marvellous collection would be conserved and preserved.

Under expert care the fragile items were dry cleaned with a smoke sponge and most were washed in lukewarm water and pressed dry. Fragile items were lined to support the brittle paper with 9gsm Japanese tissue paper and wheat starch paste (reversible inert paste used in conservation), double-sided items were lined with 3 gsm ‘Whisper’ paper to keep the text visible. 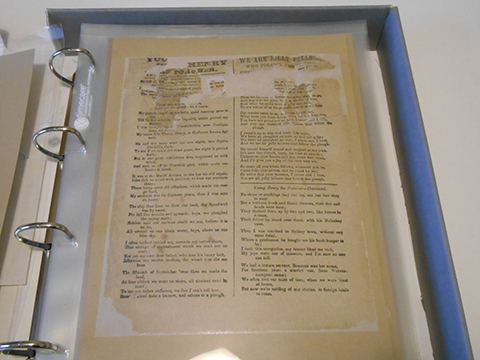 This lining process helps strengthen and support the brittle broadside paper without compromising the historical integrity of the item. As much as the original text as possible was recovered and conserved and any totally loose text was also conserved in a separate lining. 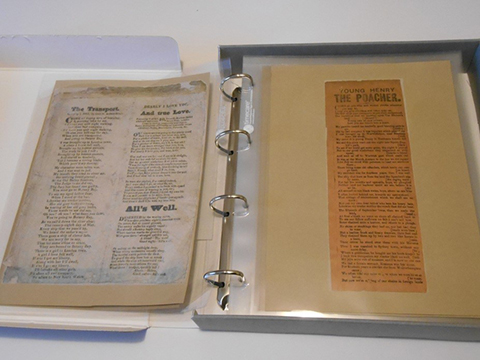 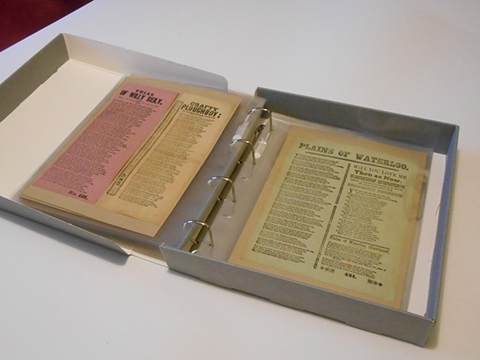 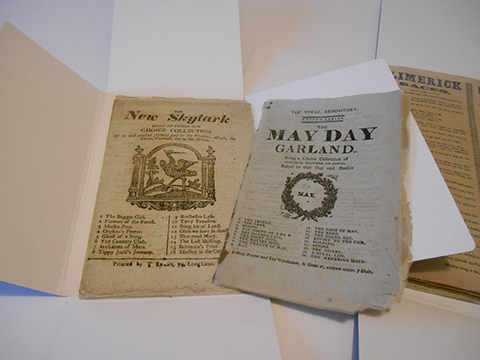 There were also chapbooks and garlands in the Broadwood collection, these were lined with Japanese paper to strengthen the weak older paper and placed into four flap folders

We are extremely pleased with the work done, a big thank you to Sussex Conservation Consortium Ltd!

Explore the Lucy Broadwood broadside collection on The Full English