‘Once more to the mouths of the people’: Ralph Vaughan Williams and Folk Song

Papers have been invited on such topics as Vaughan Williams the folk song collector; his motivations and philosophy; his relationship with his fellow collectors, composers and folklorists; his use of folk material in his original compositions; his folk song arrangements, and his use of folk tunes in the church.

There will be live music in addition to the papers. 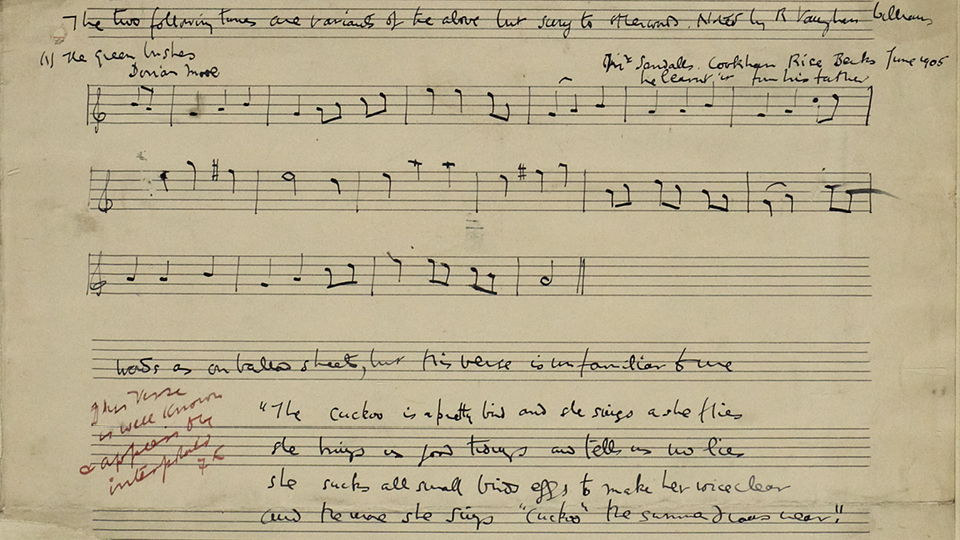 Lunch is included in the ticket price for in-person delegates.

Online delegates will receive an email with a Zoom link in the week before the conference.

From the Eastern Counties

The Rich Old Lady (Southern Appalachian Mountains)
Der Morgenstern
L’Amour de Moy
The Bloody Gardener (Newfoundland)
The Cuckoo (Newfoundland)
The folk song influence in Vaughan Williams’s own songs
Whither must I wander? (Songs of Travel)
The Sky Above the Roof
It was a lover
Dirge for Fidele
Linden Lea

1.45–3.15
Session 3 – People and places (Chair: Alex Burton)
Caroline Davison – The composer, his wife, the neighbour, and an aunt: how personal relationships shaped Vaughan Williams’s role as a folk song collector
Irene Shettle – The Carter and the Collectors: early stages in collecting in the Leith Hill and Wotton areas of Surrey, links to the Broadwood family and a brief examination of the life
and songs of Henry Garman
Paul and Liz Davenport – Vaughan Williams in Rotherham: an appraisal of a song collecting expedition

2.15–3.15
Session 7 – Not folksong! (Chair: Malcolm Barr-Hamilton)
Sean Goddard and Chris Jewell – ‘I know nothing about Folk-Dance’: The Vaughan Williams folk dance recordings of 1930.
Another paper TBC

3.45–4.45
Session 8 – Panel discussion: Once more to the mouths of the people?
Chaired by Tiffany Hore, with Julian Onderdonk, Steve Roud and John Francis